Re-opening the Panguna mine? Not yet…

Dr Volker Boege, Research Fellow at the University of Queensland writes about the likelihood of whether the Autonomous Bougainville Government will reopen the Panguna copper mine in central Bougainville. This blog post was first published by the London Mining Network and is available here.

At the beginning of February, the Panguna copper mine in central Bougainville in the Autonomous Region of Bougainville (Papua New Guinea) drew international attention once more when the Autonomous Bougainville Government (ABG) announced that, together with the chiefs of the landowning clans in the Panguna area, it had decided to re-open the mine. Refering to this announcement, the international media conveyed the impression that the re-opening of the mine was imminent. Moreover, it was reported that Bougainville Copper Limited (BCL), the former operator of the mine, would be in charge of the re-opening. At this news, the share value of BCL more than doubled overnight. Until 2016, BCL was majority-owned by Rio Tinto, and rumours spread that Rio Tinto might become involved again. On closer examination of the document signed by the ABG and the clan chiefs, however, and taking into account the history of the Panguna mine and attempts to re-open it, it becomes clear that neither a re-opening of the mine nor BCL’s involvement (not to speak of Rio Tinto) is on the cards – at least, not yet.

The Panguna mine was one of the largest open-pit gold and copper mines on earth in the 1970s and 1980s. It was majority owned by Conzinc Rio Tinto of Australia (CRA), today’s Rio Tinto. It generated enormous profits for the company and caused severe environmental degradation in mine-affected areas, subsequently becoming the main cause of the civil war that destroyed Bougainville in the 1990s. The mine was abandoned by BCL/Rio Tinto in 1990, and the secessionist Bougainville Revolutionary Army (BRA) took over the mine site. The mine has remained closed ever since. After a peace agreement was signed in 2001 and Bougainville became an autonomous region in Papua New Guinea (PNG), talks about re-opening the mine commenced. This remained a highly divisive issue, with parts of the population strongly against, others strongly in favour, and those in favour divided about who should be in charge: some sided with BCL, others supported other companies that showed an interest. Since the first ABG was elected in 2005, all Bougainville governments in principle declared that they wanted the mine to re-open, arguing that it was needed for the economic development of Bougainville and for financing future Bougainville independence. Rio Tinto walked away in 2016, transferring its shares to the Government of PNG and the ABG (at no cost), at the same time declaring that it had no responsibility whatsoever for cleaning up the environmental catastrophe it left behind. This stance was strongly opposed by the ABG, Panguna affected communities and the Bougainville public in general. The ABG called for an international campaign to hold Rio Tinto to account and to fulfil its obligations to clean up the mess. Under pressure, Rio Tinto last year finally agreed to financing an independent impact assessment of the legacies of the Panguna mine, as a first stage of addressing the dire environmental, social and health legacies of the mine that still severely affect communities today. Preparations for this Panguna Mine Legacy Environmental and Human Rights Impact Assessment are currently underway.

The current ABG, which came into power after elections in 2020, initially took a slightly different stance regarding the Panguna mine issue than previous governments. Its President Ishmael Toroama (former supreme commander of the BRA) argued that his government would only consider even thinking about re-opening Panguna after the landowners, communities and various factions in the mine area had come to a consensus about what should happen with the mine. This position has changed in recent months. Obviously now Toroama and his government also are of the opinion that Bougainville needs the Panguna mine to finance its independence. In December 2019, 97.7% of Bougainvilleans had voted for independence (secession from PNG) in a referendum. Currently, PNG and the ABG consult about the implementation of the referendum results. In these consultations the ABG is constantly confronted with the argument that an independent Bougainville would not be viable economically. The prospect of re-opening Panguna is obviously now used to counter this argument. The ABG posits that “the re-opening of the Panguna mine will be a major booster for Bougainville’s economic future and at the same time guarantee Bougainville’s political independence.”

Toroama is pursuing a novel approach in that his government directly engages with the clans of the mine area, instead of the various landowner associations and competing Panguna factions (of which BCL and its local supporters is only one). This is a smart move, given that traditionally the clans are in control of the land, and bringing the clan chiefs in can sideline the other highly divided stakeholders. In October last year, the ABG organised a first big meeting of the clan leaders to discuss the Panguna mine issue. This meeting agreed on a dialogue process about the issue and the convening of a ‘Chiefs Summit’ to develop proposals for re-opening Panguna. This summit took place on 7-9 February, and the excitement in the international media refers to its agreement about re-opening which, however, was largely misunderstood or misrepresented.

The outcome document of the summit recognises the ‘Panguna Mine Land Owners Clan Chiefs’ (PMLOCC) as the “true representative of all the Panguna Mine customary landowners” and as “the only stakeholder for ABG to consult with at this primary stage of consultation”. It posits that formal discussions on re-opening “should take place primarily between ABG and PMLOCC through transparent and honest open dialogue”. With these formulations other entities like landowner associations or local companies aligned with foreign mining interests, which so far had dominated discussions, are sidelined. The envisioned dialogue is to address “the following issues: (1) welfare of the Panguna land owners; (2) benefit sharing; (3) environmental destruction; (4) social inconvenience issues”. Finally, the document states that the ABG is “to develop a best strategy forward in consultation with the PLMOCC to re-open Panguna Mine under a local entity jointly owned by the customary resource land owners and ABG on behalf of the people of Bougainville”.1 So here is no mention of BCL at all, and it is highly unlikely that all clan chiefs would agree to have BCL as this ‘local entity’ – BCL is still perceived by many today as responsible for the environmental destruction and the war caused by the Panguna mine, and there is widespread dislike of BCL in many quarters of the populace. Participants of the summit say that the understanding was that the ‘local entity’ would not be BCL, but a new entity altogether. Furthermore, there is no actual ‘decision’ to re-open Panguna any time soon, instead there is talk about a “primary stage of consultation”, development of “a strategy forward”, “open transparent dialogue”, “consultation”. Anybody familiar with the Panguna history knows that this means many, many rounds of talks ahead (which might lead to nowhere). Moreover, the ABG also assured the landowners that the Bougainville parliament will pass “relevant laws” in order “to protect the people and their resources”, and this will take time too.

Perhaps more interesting than the content of the outcome document (just over one page) is the list of signatures to the document (almost ten pages): it has the name of dozens of – male and female – clan leaders, and among them the leaders of the various competing factions, companies and landowner associations (which here sign in their capacity as ‘clan chiefs’). This indicates that the ABG was successful (for the time being) in bringing the different groups together, and this would be a remarkable achievement. It remains to be seen, however, whether this will actually hold. In the aftermath of the summit there were already voices demanding the inclusion of leaders of landowner associations, and there were feelings among some participants of having been strong-armed into agreement.

Moreover, one has to take into account that so far only the chiefs of the clans of the immediate mine area (the Special Mining Lease – SML) are involved in the process, not the clans of the other mine affected areas, in particular those downstream of the mine who had and have to bear the brunt of the environmental degradation, health and social issues. It is clear to the ABG and the SML-clans that they will also have to have a say in the decisions about Panguna – and here we are talking about many more clans than just the five from the SML. And there are also some voices arguing that all Bougainvilleans should decide about the future of the mine (via a referendum for example), given that they all suffered from the war caused by the mine.

What is important now is that the discussions about re-opening Panguna do not get confused with the Panguna Mine Legacy Impact Assessment process. The chief summit document is very clear in this regard, stating: “The ABG and PMLOCC agree that the previous legacy issues caused by Rio Tinto are to be dealt with separately”. It is clear that the clans downstream of the mine are more interested in the assessment process than the re-opening discussions.

Over the next few years, Rio Tinto will be kept very busy dealing with these legacy issues, and it is doubtful whether it will have any appetite to get involved in lengthy and open-ended discussions about re-opening the mine. 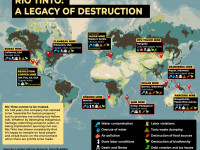