Dr Volker Boege, Research Fellow at the University of Queensland blogs about Rio Tinto's refusal to take responsibility at its recent AGM for the disastrous effects of the Panguna mine operations. This blog post was first published by the Peace and Conflict Studies Institute Australia (PACSIA) and is available here.

PaCSIA has worked with communities affected by the environmental, social, cultural and health legacies of the Panguna copper mine in Bougainville for several years, commencing with the ‘Panguna Dialogue Project’ in 2015. For this reason we are closely following developments in attempts to hold Rio Tinto to account for the environmental destruction and social disruption its mine left behind on Bougainville (see https://pacsia.com.au/2020/10/20/panguna-mine-legacy-pacsia-welcomes-complaint-against-rio-tinto/ ).

Panguna was a topic at Rio Tinto’s AGM on 9 April 2021. This AGM was the first AGM since the destruction of the 46,000-year-old Juukan Gorge Aboriginal rock shelters in Western Australia in May 2020. The company was on the defensive because this wanton destruction had caused a public outcry in Australia and around the world. Accordingly, Rio Tinto’s chairman and all the other members of the board at the AGM repeated their apologies for the Juukan Gorge disaster and assured the shareholders that something like this would never happen again. They vowed that Rio Tinto had learned its lesson, that it would put in place new policies to protect cultural heritage, and that it would do everything it could to regain the trust of Indigenous people. The new Chief Executive, Jakob Stausholm said Rio Tinto acknowledges that the company is only a ‘guest’ on Indigenous land and will behave accordingly, working in partnership with traditional owners in Australia, the USA, Canada and elsewhere.

So far, however, all this sounds like hollow talk. There are numerous sites all over the world where Rio Tinto is accused of ignoring the voices of communities affected by its operations. In the lead-up to the AGM, communities and NGOs raised concerns about environmental destruction, human rights violations and mistreatment of Indigenous peoples by Rio Tinto in Mongolia, Madagascar, Serbia, the USA, West Papua (Indonesia), and Bougainville. At the AGM these groups put questions to the Rio Tinto management. The responses were disappointing. Rio Tinto gave the impression that it is only prepared to say ‘sorry’ to Indigenous people when the management realises that investors, the public and influential political forces are upset and are putting pressure on the company.

Rio Tinto’s refusal to take on responsibility has become clear not least in the case of the Panguna mine. Far from apologising for the environmental, social and cultural catastrophe its Panguna mine had caused on Bougainville, Rio Tinto Chairman Simon Thompson blamed the Bougainvilleans for ‘expropriating’ Rio Tinto’s subsidiary Bougainville Copper Limited (BCL) in the course of the war of the 1990s on Bougainville, failing to mention that this war was mainly caused by the disastrous effects of Panguna mine operations. Thompson did not respond to the questions put to him (by Jubilee Australia) as to whether the company would commit to funding an impact assessment of Panguna and addressing the devastating problems left by the mine, as demanded by mine-affected communities. Instead he tried to pass the buck, claiming that Panguna is a “very complex legacy issue” which “does require the engagement of all stakeholders, and that obviously must include all of the local communities, the ABG, the PNG Government, BCL and others”. This statement hides the fact that Rio Tinto is not just one among a number of ‘stakeholders’ but the main actor responsible for the plight of the mine-affected communities, the actor with the prime moral obligation to apologise, and the only actor with the material resources to actually clean up the mess it left behind. Thompson’s acknowledgement of “the concerns expressed (…) about the human rights and the environmental issues in Bougainville”, his assurance that Rio Tinto is taking “allegations seriously” and “taking all the necessary steps to assess any involvement that Rio Tinto may have had in these adverse impacts” cannot be believed as long as the company is not willing to engage in an actual process of reconciliation with the communities in Bougainville, and to contribute to remedying the legacies of the Panguna mine. It will take more pressure from international civil society to finally make Rio Tinto walk the talk.

A warm thank you to London Mining Network for coordinating activities in preparation for the AGM. More information can be found here: https://londonminingnetwork.org

Here is the question that Jubilee Australia asked at the Rio Tinto AGM:

“In 2020, communities in Bougainville filed a human rights complaint against Rio Tinto in Australia about the legacy of the vast amount of mine waste left behind by the company’s Panguna mine, from which Rio Tinto divested in 2016. Communities report that the tailings have blocked parts of the river, causing widespread flooding of their lands, water pollution and destruction of their livelihoods and sacred sites. They have called on the company to fund an independent human rights and environmental assessment to identify risks posed by the mine and contribute to an independent fund to address these impacts on local people and assist with clean up.

Given Rio Tinto’s recent commitments to ensure that it leaves a ‘positive legacy’ (Stausholm 23.04.21) and to learn from its mistakes and rebuild trust with indigenous peoples impacted by its operations, will the company now publicly commit to funding an impact assessment of Panguna and addressing these devastating problems left by the mine?”

And this is the ‘answer’ given by Rio Tinto’s Chairman Simon Thompson:

“Thanks for that question, and again, perhaps for the benefit of shareholders who are not familiar with the history of Bougainville. But this was a mine which was owned and operated by Bougainville Copper which is a listed company in Australia which CRA had a 54% shareholding. Production at the mine started in 1972, and it continued until the civil war in Bougainville resulted in the operations being suspended in 1989, and at that point, all BCL staff was evacuated from the site. The civil war then continued for about 9 years after the suspension of the mine. So the civil war came to an end in 1998, but even after the war ended the security situation was such that BCL was not able to resume the operations of the mine, so the mine was never closed. The mine was suspended in 1989 – more than 30 years ago, and no Rio Tinto personnel have had access to the mine since then. So to be clear, BCL did not walk away from Bougainville, it was in effect expropriated because of the civil war. Now the HRLC has made allegations that Rio Tinto is in breach of OECD guidelines and the UN guiding principles of business and human rights. It has filed a complaint the Australian National Contact Point. We absolutely acknowledge the concerns expressed, and the concerns expressed by you about the human rights and the environmental issues in Bougainville and we take those allegations seriously. We are taking all the necessary steps to assess any involvement that Rio Tinto may have had in these adverse impacts. But what is very clear to us is that any lasting solution to this very complex legacy issue really does require the engagement of all stakeholders, and that obviously must include all of the local communities, the ABG, the PNG Government, BCL and others. So we do hope that the ANCP will help to clarify this very complex history of Bougainville and we are working with other stakeholders to try and find a neutrally agreed and lasting solution, and those discussions are actively ongoing as we speak.” 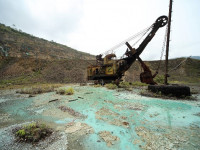 Re-opening the Panguna mine? Not yet…